Bajaj Auto screws up electricals, makes sure its bikes have the worst gearboxes in the category, and has a horrid after-sales setup.

So I went ahead and bought another one.

Well, had a 10 year experience with a Pulsar-200 and was sure that machines coming out of Bajaj stables are adept to take up Indian roads; or lack of it. I’ve witnessed multiple cases of suspension failure across Hondas (no kidding, I have seen monoshocks snap), and in contrast hold my previous 10 year old Bajaj mile-muncher as a testament to ‘adapting to Indian conditions to survive’. Of course, you will figure out the real reason at the end of this.

So this time, I decided for go for the 400 CC they claimed to be a game changer.

For starters, the Good: 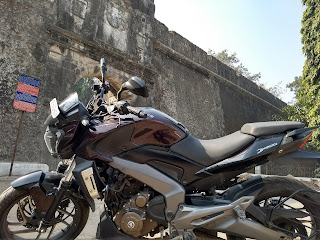 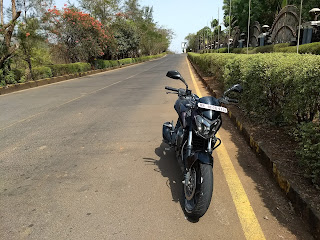 Now coming to the point why I bought one. For this, bear with this little story:

One fine morning while you cruise easily on your side- you observe that the other side of the road is not that fortunate – an early morning traffic snarl it seems. You also spot that guy on the other side at distance, sans helmet on a Hero Honda Passion, with an open silencer, and a logo declaring his association to a notorious political party. 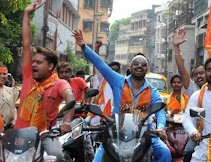 The joker has come to cognizance of his imminent fate – a possible delay of 2.50 minutes! ! He decides that a person of his importance cannot put up with this.. He has just vandalized a few properties, and now has to get somewhere quickly for his next assignment - to set few buses ablaze, or demolish some outspoken actress' home, maybe – urgently of course. Righteously, he comes on to the wrong side of the road and starts coming head on - bleating his shrill horn and zig zagging in style at the oncoming traffic head on, creating absolute havoc for other law abiding citizens.

‘Jai Maharshtra’ – the maniac’s saffron sticker proclaimed. Mind you: assembled in Pune, the Dominar checks the ‘son of soil’ theory as well and started changing its behavior.

While I was quietly meandering at 30 Kmph, the Dominar clearly did not like my calm. The Dominar decides to take the matter in its own hands and starts assuming control. Machine over man this time..

Magically, my left foot slips to commence some clicks to drop a few gears.. And then..

Gear 1..  The throttle is opened and the front wheel lifts up by a few degrees, while the rear tyre scavenges for grip on the tarmac- a few slips cite victory of torque over the friction. The clutch still in play, the engine revs with quite a distinct roar in the busy road and catches the attention of the entire street.

As the engine is mated to the transmission with some of the clutch in play, the rear tyre screams for grip, and the front tyre experiences a lift-off again. The throaty engine whips out the 35 NM torque and equal number of horses for the road..

Now that the Dominar has transformed into a rocket, we do have our maniac’s attention. You can see him watching you in confusion, slowing down a bit, and see fear building up in his eyes, as you determinedly barrel towards him.. Head on - collision course..

Gear 3: We are building the revs again. While the speedo determinedly builds up towards areas where the third digit would be needed soon, the engine has not yet got to its redline (the rev limiter kick in – in Dominar’s case). Noting that we have three more gears left, we keep accelerating. As a final war trumpet, we activate all the DRLs. 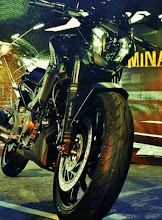 Our nitwit is visibly troubled now. His miniscule brain gets into overdrive, computing the probability of his survival after being rammed by a heavy machine, with a crazy look, angry lights, possessing that kind of momentum gained at that unmentionable speed.

Noting that the Dominar may be out to annihilate him, he sights the nearest opening in the road divider and darts to the stagnated traffic on his (correct) side of the road.

It’s job done, the Dominar switches off its lamps, engages the brakes and glides back into its moderate civilian speeds.

All this – from the downshifts, acceleration to braking back to normalcy: abating aggression with aggression, was concluded in less than 20 seconds.

Now lets address that earlier question: Why are we buying this?

All that aggression.. Or countering aggression - You could do all this at Rs. 160,000 ex-showroom (non-ABS). For any other machine to have undertaken such a feat, you would need to shell out multipliers (BMW 310, KTM RC 390, Ninja?). The Bajaj propels Uncle Scrooge to that mid level sports bike category at a substantial discount.  Precisely why this fellow with a blue cover- 4 lion embossed passport bought this.

PS: Having said that, I plead all serious bikers not to waver from the RC 390, no matter what other bikes claim to do, or the discounts they offer. Regardless of whether you are highway king, stunt master, track racer, chain snatcher or a criminal on the run, the RC 390 triumphs for all your needs. Work harder, stop being a scrooge, beg or steal - and get the KTM..